BETHPAGE, N.Y. — Over the years, Tiger Woods has drawn a lot of people to golf. Twenty-nine-year-old Brooks Koepka, who leads the PGA Championship by seven strokes after two rounds is one of them. So is 26-year-old Jordan Spieth, who sits tied for second. There’s 30-year-old Rickie Fowler and countless others at Bethpage Black—they all grew up watching Woods dominate. They fell in love with his swing, his attitude, his utter annihilation of the field. As kids, they wanted to be just like Tiger Woods.

Mason and Clay Anderson? As kids, they just wanted to find out who the hell Tiger Woods was.

Enough Googling finally led the Anderson brothers to Woods’s highlights—his famous chip-in on No. 16 at the 2005 Masters remains a favorite—and they were hooked. Their father, Jarrett, had just introduced them to the game, and suddenly they had someone to mimic, even if the footage they studied was pixelated and the golfer in it was no longer the same. They grew up and attended Texas A&M, and they assumed it would always be that way, that their best memories of their hero would always come through a screen. And then surgery to fuse Woods’s spine—surgery he underwent to achieve such lofty goals as sitting at the dinner table without pain—actually worked.

Tiger Woods missed the cut on Friday. There was a time when this would have been the most shocking golf news of the year. From February 1998 until May 2005, he made a record 142 straight cuts. The streak is one of his greatest accomplishments, up there with his 81 wins and 15 majors.

This time it was surprising, but not shocking. He won the Masters last month, his first major win in nearly 11 years, but he is 43. This is all bonus time for his young fans, the ones who didn’t realize there was any time left at all.

Clay, 19, made a bucket-list trip to Augusta last year. He wears his MASTERS hat as he walks the Bethpage black course on Friday. Woods finished tied for 32nd that week, but Clay marveled at the galleries. He couldn’t get near the holes Woods was playing. Even when Clay followed other golfers, he could track Woods’s progress based on the roars from across the course. That’s a par. That’s a birdie. Clay laughs as he recalls watching other golfers address the ball, then step back to allow a crowd reaction to die down so they could focus.

His sons had heard that term. But until they saw it for themselves, they didn’t know what it meant.

One of the PGA’s most delightful traditions is that it groups together the winners of the other three majors for the first two days. So fans near the 18th green on Friday afternoon had the opportunity to watch as Brooks Koepka, who won the U.S. Open; Francesco Molinari, who won the British Open; and Woods finished their round, shook hands and ascended the bridge that took them to the scoring area.

“Here we go, Francesco!” someone yelled to the man who shot two–under par for the day to put himself in a tie for 26th.

“Attaboy, Brooksie!” someone saluted the tournament leader, whose seven-stroke lead seems likely to make him the first golfer in history to hold back-to-back titles in two majors at once.

As it so often is, the sound for Woods was different. They chanted, “Tiger! Tiger!” happily, and then almost desperately. Woods scribbled 73 on his scorecard. He was three-over for the day, five-over for the tournament, one stroke shy of the cut. He did not look up.

Tim and Sam Kerr can track how long they have followed Woods by the technology they used to do it.

“First Tiger memory is him winning at Pebble [Beach at the 2001 U.S. Open],” says Tim, 30, after watching Woods make par at No. 14 on Thursday. “We recorded the whole thing. Literally, on the VCR.”

Tim was 11, Sam seven. They still have the tape, although they can’t even play it now. Today they consume media through Amazon Prime, which is also how they ended up in the matching tiger costumes they are wearing to the course. (Only $70 for two!) Tim is a cinematographer who runs a production company called Albatross Pros in New Haven; Sam, 26, is an elementary school teacher in Buffalo. They are scratch golfers now, but when they were teenagers learning the game, they spent rounds pretending to be Woods. “Every putt was a putt to win the Masters,” says Sam.

Their love for him ebbed as his career did. They had expected to watch him dominate forever; when he became mortal in the late aughts and then missed years at a time to injury, they began to realize how fleeting greatness can be. They grew up. 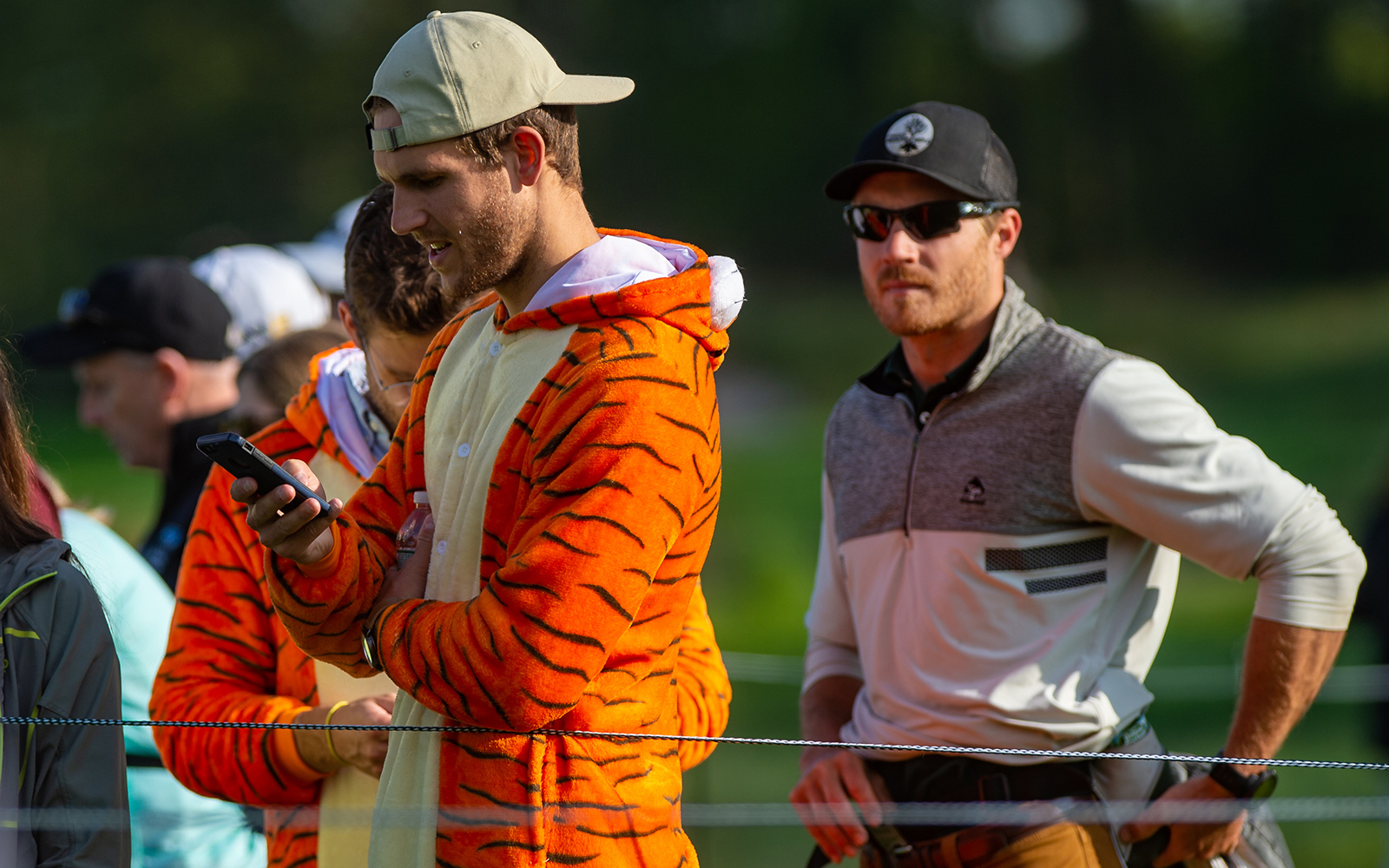 Then their dad, a golf course superintendent, got extra tickets to the PGA, and they bought those suits. Woods will never again dominate the way he did on their VCR, but for the first time since they could vote, they came into a major knowing he could win it.

There are the Andersons and the Kerrs, but there are also the Woodses: His 11-year-old daughter, Sam, and 10-year-old son, Charlie, used to call their dad the YouTube golfer because they had never seen his exploits in person.

For a while, with his creaky back, Woods had a way of making people feel old. These days he makes them feel young. When he won the Masters last month, the Kerrs alarmed neighbors, screaming and running around their apartments. “We haven’t cheered like that in, like, a decade,” says Tim. They are only here Thursday, though, so they’ll only get to wear the costumes once, right?

Tim scoffs. “Every Sunday on the couch!”

“Every Thursday through Sunday,” Sam says. “Let’s be honest.”

In his prime, Woods was better than anyone ever at finding a way to play the weekend. He groused after his round on Friday that he had failed to do that this week. “Just didn’t do the little things I need to do,” he said. “I had a couple three-putts. I didn’t hit wedges close. I didn’t hit any fairways today.”

That still makes him angry, just as it once did. But his consistency is gone. He acknowledged as much before the PGA began, when a reporter asked whether he was concerned at night about what he would be able to do when he awoke.

“I feel that way every day,” Woods said. “I don’t know how sore I’m going to be the next morning. I don’t.” 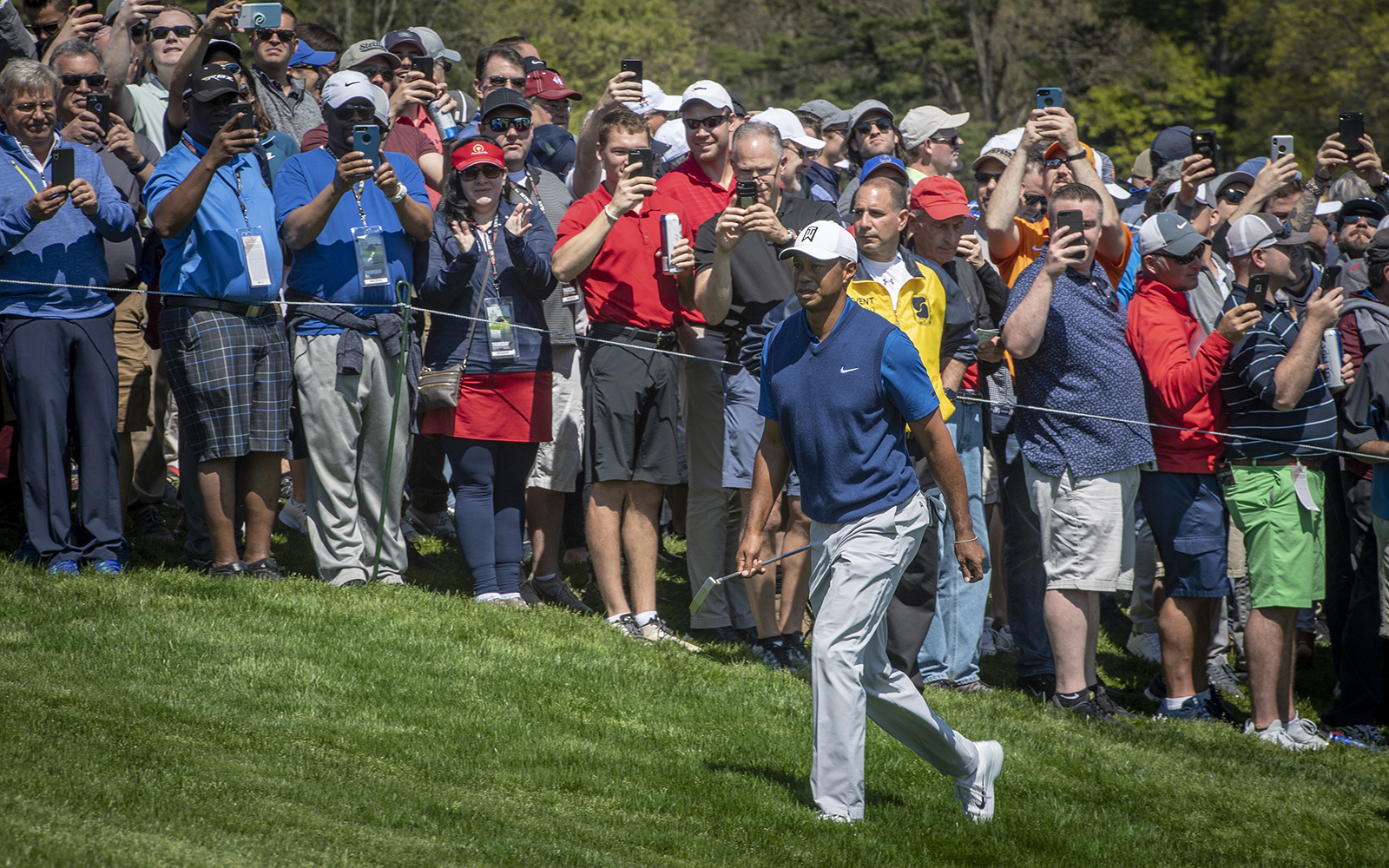 It has not been easy for this fierce competitor to realize he is losing his battle with age. He once practiced every facet of his game every day. Now he knows that a schedule like that will leave him unable to walk, so he focuses for a few hours, then rests. He did not feel well on Wednesday, so he shelved his plan to play the back nine in the morning. It didn’t help.

“I just wasn’t moving the way I needed to,” he said after his round on Friday. “That’s the way it goes. There’s going to be days and weeks where it’s just not going to work, and today was one of those days.”

Today was one of those days. He would not have been able to force a concession like that out of his mouth a decade ago. It’s all bonus time for him, too.

As far as Catherine Slade, age 12, can remember, the only hat she has ever worn is her black TW-logo baseball cap. She allowed her parents to buy her the identical hat in white this week, just in case they got lucky and Woods was willing to autograph it, but she’s still wearing the sun-faded black one, with her divot tool clipped to the left side of the brim and her ball marker clipped to the right. She made an image of Woods her Google account profile picture. She scrutinizes video of his swing for tips. She thinks about him every time she is tempted to skimp on studying for a test or practicing the flute. Tiger would judge you for this, she scolds herself.

Is Catherine Slade the biggest Tiger Woods fan at Bethpage?

“Oh yes,” she says, after watching him make par on No. 13 on Friday. “One hundred percent. Definitely. Forever.”

She came with her parents and her seven-year-old brother, Jeremy Jr., and ditched them as soon as she heard the roar. “He’s here, he’s here,” she gasped, as she ran to watch from as close as she could. This is her third time seeing him in person, and each day ranks among the best of her life.

The first time—and, until Friday, the best day—came a year ago, at the U.S. Open at Shinnecock Hills in Southampton, N.Y., 70 miles east of her home in East Rockaway. Her dad took her, and at one point he hoisted her onto his shoulders as Woods putted on the practice green. “If Tiger comes over here, I’m going to start crying,” she announced. 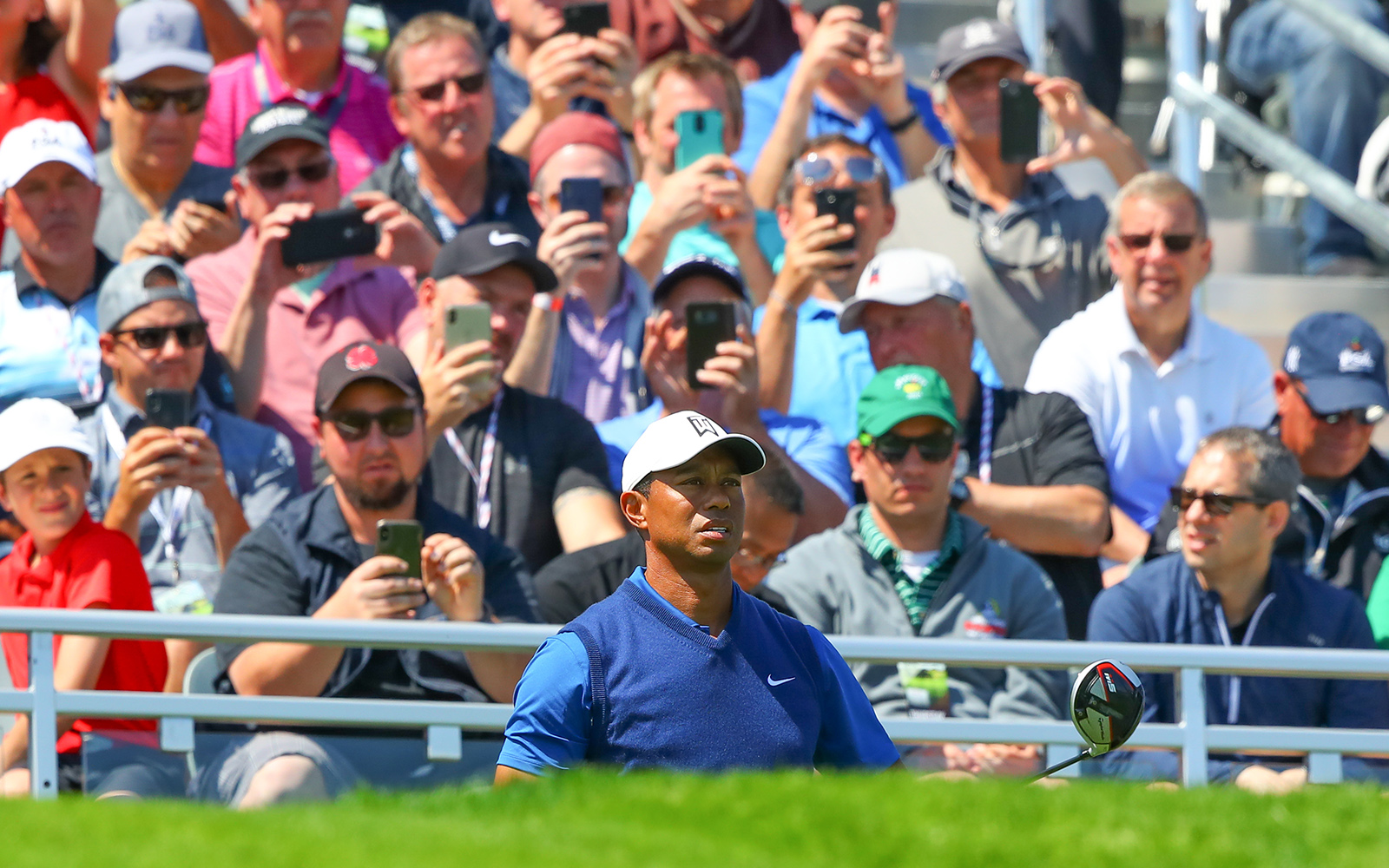 The second time came just three days ago, on Tuesday, when she and her PGA junior league team came in their matching orange polos to watch practice rounds. She rushed to the putting green when he arrived, but she too saw the Tiger effect for herself: She couldn’t get within a few yards of him. So she began jumping in the air. She jumped for several minutes, but only one time did she catch a glimpse of him, just a sliver of the back of his neck. “Maybe a millisecond,” she estimates. Tuesday, she says, immediately shot to No. 2 on the list of best days.

Catherine was on her way to play nine at Eisenhower Park in East Meadow—11 miles west of Bethpage—last month as Woods stalked up No. 18 at Augusta. She and her father, Jeremy Sr., watched the livestream on Jeremy’s phone on the way to the course. They cheered in unison when Woods holed out.

“When she was growing up, all we spoke about and watched and studied was Tiger, but he was injured,” says Jeremy. “So for him to be back to winning, and she sees it, we’re just crying.”

Woods did not win the PGA this week. He did not sign Catherine’s hat. He didn’t even acknowledge her. None of it mattered. Friday, she says, was still the best day of her life. He’s back, and young fans who had to rely on other people’s memories of him get to create their own. They scream his name. They wear his clothes. They stare in wonder. It’s all the same. But it’s not the same at all.

NBA Power Rankings: Where All…

Hit a home run for…

Postcard: What is the tackiest…